Twenty-two years ago, when the US Department of Agriculture finalized the standards for its National Organic Program, produce breeders went back to the drawing board. There was little organically grown seed available for farmers to purchase or for breeders like Oregon State University’s Jim Myers to use to develop more of them.

“There were some heirlooms that people knew worked pretty well in organic systems,” Myers says, referring to seed that has been passed down from farmer to farmer, adapting to regional weather and pests over generations. When he began working with broccoli, he gathered up some conventionally bred seed and started randomly crossing. He sent some to organic farmers to adapt to their regions, and they began bouncing incrementally improved seed back and forth with him, from their fields to his. Getting the first organic broccoli seed to market, using that combined effort, took about 10 years.

Now, you can flip through Fedco or Johnny’s catalogs and find what appears to be ample organic seed for sale. Organic-only seed companies such as Row 7 and The Living Seed have also cropped up over the last two decades, as demand for organic produce in the US has burgeoned—sales have grown from less than $8 billion in the organic program’s first year in 2000 to almost $56 billion in 2020.

But, according to a new report from the nonprofit Organic Seed Alliance (OSA), all the available organic seed we’ve got isn’t enough to meet the diverse and region-specific needs of organic growers. This, says Kiki Hubbard, OSA’s advocacy and communications director who co-authored the report, puts the integrity of the organic label at stake. Furthermore, if organic seed research doesn’t increase to help improve and expand the seed supply that’s out there, the resilience of organic food crops could be in jeopardy.

Not all organic crops are grown from organic seed

Organic seed has to do everything conventional seed does—yield plenty of delicious crops, resist pests and disease, stand up to climate anomalies such as drought—without a boost from pesticides and herbicides. Harriet Behar, an organic vegetable farmer in Wisconsin, says organic farmers often find that organic seed works better for them than conventional, “since there are characteristics bred into the varieties that help them in their…system.” However, because that initial lack of organic seed two decades ago, organic standards were written to allow farmers to plant conventional seed as long as it wasn’t genetically modified or treated with a chemical seed coat. Hubbard believes the USDA’s intent was to eventually get to 100 percent organic seed use; perhaps, bit by bit, organic farmers would shift to buying more and more of it as the amount and types gradually increased thanks to the efforts of Myers and his ilk. 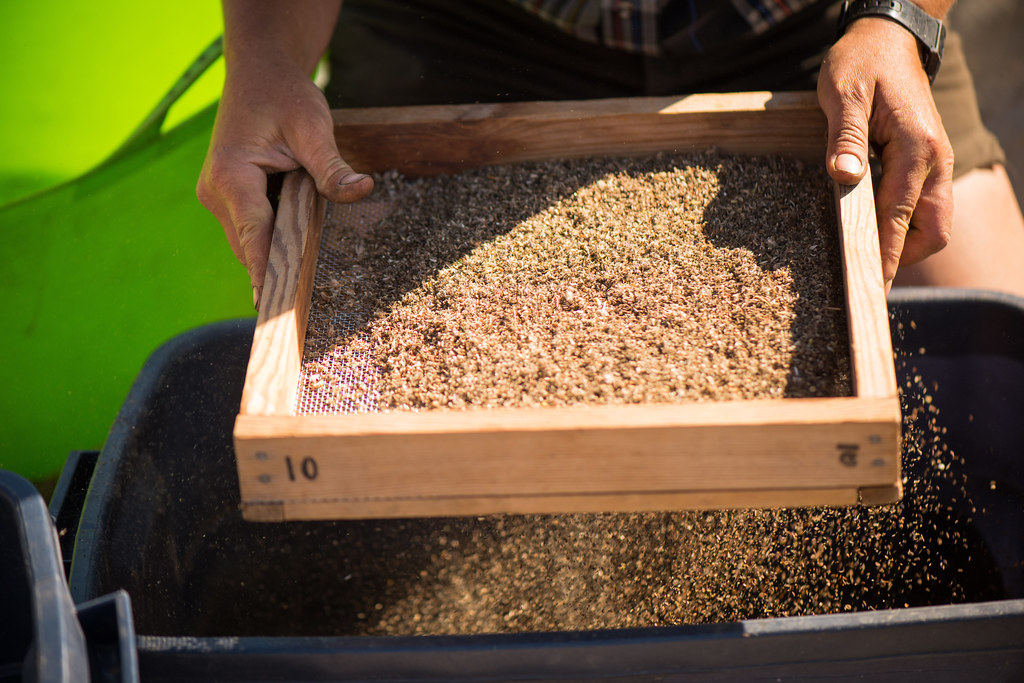 A seed cleaning demonstration at the Organic Seed Growers Conference. When seed is harvested, it often contains the seed of weeds, chaff from dried plant material, or soil. Screens are used to separate this material from the seed. Photo by Broken Banjo Photography.

These days, there are more organic seeds and seed varieties on the market (although there’s no data on exactly how much, says Hubbard). Not every organic farmer is using it, though.

Of 1,059 organic farmers OSA surveyed for its report, 83 percent said organic seed mattered for the integrity of organic food production. Yet, only 27 percent of them use all organic seed. Organic vegetable farmers use less organic seed the bigger they get; Those with fewer than 50 acres plant 75 percent organic seed on average, while those with more average 55 percent. “What I’m calling ‘industrial organic’ companies like cheap seed and that’s conventionally produced,” says Myers. (Organic seed can be 30 to 60 percent more expensive than non-GMO conventional.) “They’re following the regulations on doing organic, but they’re not making a philosophical…change to their production.”

Most surveyed farmers said they bought conventional seed because they couldn’t find equivalent organic varieties. Although this is the only reason allowable under USDA organic standards, it’s a valid complaint. Johnny’s broccoli section, for example, offers organic seed for three varieties—De Cicco, Belstar and Santee—but conventional seed for 17. This kind of gap exists, says Charlie Brummer, a spinach and alfalfa breeder at University of California, Davis, partly Because growing good-quality organic seed is more expensive and complicated than growing crops. “You’ve got challenges of crop management, and controlling for insect pests and keeping weeds down” is difficult without chemicals, Brummer says. “If there are more varieties for which organic seed is desired, it might be hard to find seed producers willing or able to produce that seed organically.”

“Seed production is basically seed stewardship,” says Isaura Andaluz, co-founder of the Arid Crops Seed Cache in New Mexico, and people who grow it “have to have a lot of experience and knowledge.” But even this specialized bunch can’t control contamination from GMO seed fields, “because no one can control nature,” she says.

Pollination mix-ups—whether in a wind-pollinated crop such as corn or a bee-pollinated crop such as peppers—can damage its integrity, potentially leading to seed that isn’t true to type. “These alterations may take decades to emerge,” Andaluz says, but it could eventually lead to a drop in biodiversity. She believes the only way to counter this is for farmers to begin saving their own seed. (One-quarter of OSA’s surveyed farmers say they do.) 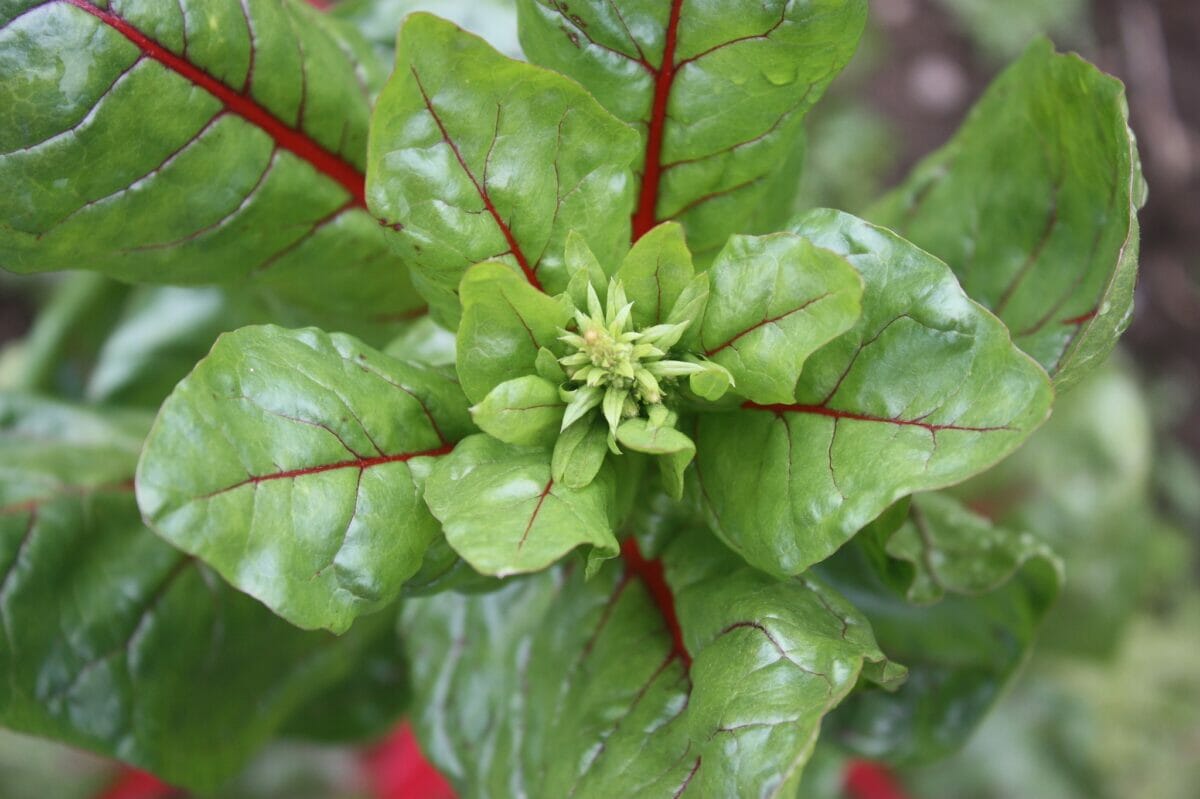 Brummer says many conventional seed companies are eager to dip their toe into organic seed production, but “it’s just too expensive to produce lots of different varieties organically if, at the end, people don’t have to buy it.” Not to mention that the Big Four chemical companies, including Bayer and Corteva, hold patents on a large swath of the genetic material that breeders need to achieve resilience in organic seeds for organic farmers, and Brummer says there are other hurdles to getting seed from gene banks.

Embedded in many of these issues, though, is what Hubbard, Brummer and Myers see as a root cause of keeping organic seed production in its current stagnant state: the conventional seed loophole. Fix that and farmers would be required to buy organic seed, which would give seed companies the financial incentive to produce it. Hubbard points out that more money to research and support organic seed production and to help seed growers build up infrastructure such as storage and specialized equipment that can separate weed seeds from crop seeds, for example, is also essential.

Back in 2018, the National Organic Standards Board, which advises the organic program, recommended requiring yearly improvements in organic seed sourcing. If the USDA were to actually take greater steps to do this, Hubbard says, “it would signal to organic producers and the broader organic community that…organic seed is important to the integrity of the organic label. As we all know, it all begins with seed.”

The post To Meet the Demand for Organic Crops, We Need to Produce More Organic Seed appeared first on Modern Farmer.