“Nobody ever ask about that!” Daniel Sullivan, owner of Shipwreck Honey in Seattle, says his gleaming impishly behind black plastic-frame glasses. I beam with equal enthusiasm; I’ve been on a quest for the magical elixir, searching farmers markets from the UK to Canada and California. Looking over his shoulder with a conspiratorial grin, Sullivan jabs a thumb into his chest and declares, “If you want the good shit, I’m your guy.”

We’re talking about propolis, the resinous substance bees produce to build and repair hives. It can also be ingested by humans, and has been used for medicinal purposes since ancient Egyptian, Greek and Incan times. Propolis has the potential to become a steady source of income for American apiarists, too—if people only knew what it was.

Bees make propolis, also known as “bee glue,” by mixing enzymes in their saliva with beeswax and substances they extract from tree sap, buds and plants. The word “propolis” comes from the Greek for “entrance to the city,” and bees use it to defend the hive: smoothing it over walls to fill gaps and cracks, blocking out air and light. If a foreign entity infiltrates, such as a mouse or snake, the bees will embalm it in propolis, preventing decay and stench.

Studies have found propolis to have similar antimicrobial properties in human bodies, fighting infections and respiratory ailments, coating the throat and sealing wounds. I’ve poured it on cuts that rapidly healed, staved off many a cold and took it during COVID-19, which may have helped keep my mild symptoms. “This is the most powerful thing bees do,” says Sullivan. “Honey is great, but it’s cute compared to this. What if we [approached] propolis the same way we did honey?”

He pulls out a stainless steel jar and pops the vacuum-sealed lid on his own personal propolis stash, offering me a whiff of the marble-sized, deep crimson nuggets. I inhale deeply, sensing aromas of sweet heather, willow and Hemlock—a snapshot of greater Seattle’s terroir. The aroma, composition and color of propolis reflects the botanical profile of a geographic region; in the Pacific Northwest, it’s red, but the substance can be black, yellow or green.

Bees lay down propolis in strips and chunks that are hard and brittle when cold, becoming gummy and pliable when heated. I take a chunk in my palm and feel it soften, releasing aromas of hay and sunshine. Apiarists collect and sort these chunks, removing treasures of the hive, clues to not only the lives of bees but the entire ecosystem: entombed chunks of honeycomb and wax; bits of burlap; mummified insects. 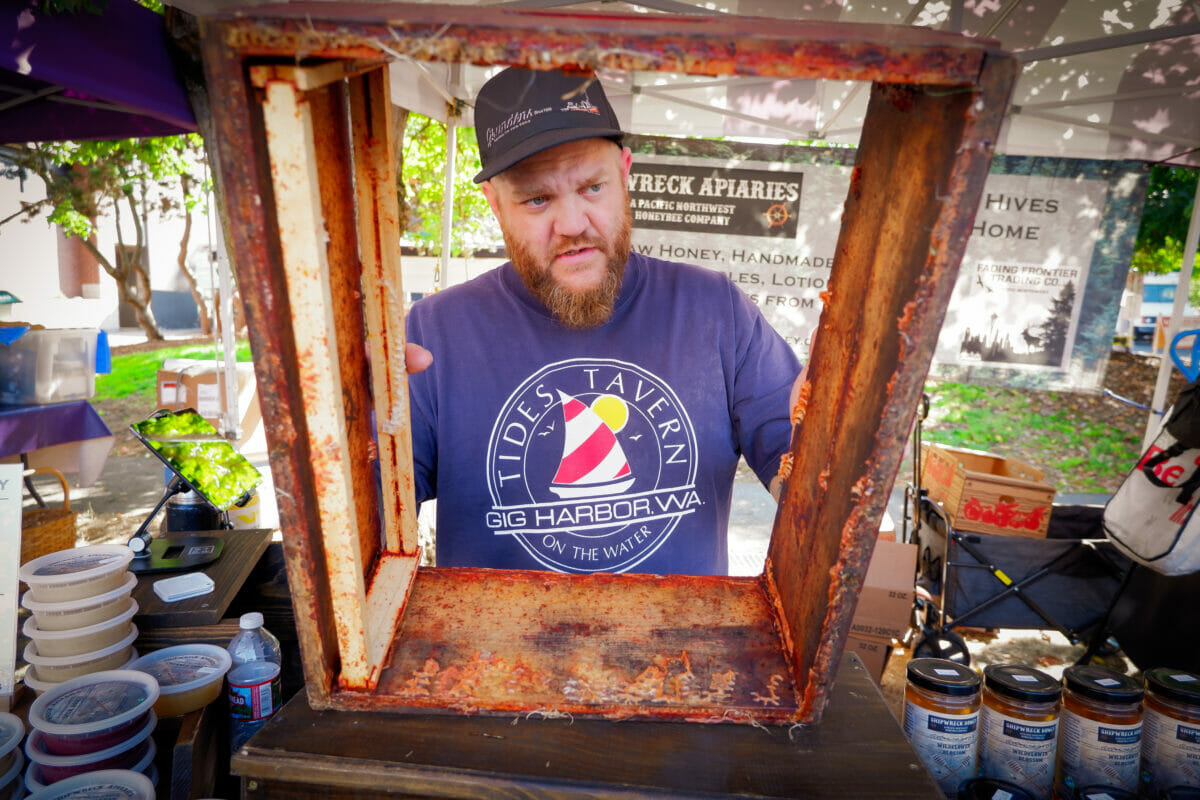 Daniel Sullivan, owner of Shipwreck Honey in Seattle, holds up a hive frame with propolis on it.

The secret to propolis is patience, a trait Sullivan admits doesn’t come easily, and he imagines this is why more apiarists don’t produce it. It isn’t difficult to make, he says, but it requires time and attention to detail: creating the ideal conditions for bees to thrive and harvesting the bounty. “Propolis isn’t a rare commodity, it’s a staple,” he says. “Everyone should be collecting this stuff, and as a revenue stream, absolutely. Not doing it is like saying, ‘I’m too busy to make coffee in the morning.’”

It may be a staple, but propolis is not an infinite resource, he adds; it’s a precious material to be painstakingly mined and processed. Sullivan collects and sorts it manually; others use a propolis trap, a plastic sheet that covers the entrance to the hive, marked with large holes that domesticated bees instinctively, systematically fills with propolis. Sheets or collected pieces are frozen, shattered and chopped into a fine powder. Finally, this is dissolved in alcohol, agitated, and aged; Sullivan uses grain alcohol and won’t sell anything younger than six to nine months.

Yet the biggest hurdle isn’t production, it’s marketing. Propolis is more prevalent in Europe, but most North Americans don’t understand what it is or how to use it without a lot of explanation. Sullivan used to bring propolis to the farmers’ market, but he found himself losing much-needed honey sales while caught in circuitous conversations with those who rarely purchased. He even created an informational brochure—which people would pocket while asking questions.

“If I took all [my propolis] out, it would make a sizable difference [in my income],” says Sullivan. Apiarists can get anywhere from $9 to $15 per ounce for raw bee propolis and between $18.50 to $35 per liquid ounce for extracts and tinctures. “But you’ve only got a four-hour window at these markets to sell and get back.” Besides, he adds, “I can’t stand the thought of selling this to someone who’s just going to discard it. I’m really emotionally invested. My job is to not only spread it wisely but also to conserve it.”

And customers need to be informed, because there are a lot of poseur products, Sullivan warns. Capsules and honey are especially suspect, as propolis’ pharmacology doesn’t easily lend itself to these forms. “The good shit” comes in tinctures, and you’ll know it when you find it: dark and strong, herbal and bracingly medicinal, like a high-proof digestif. When showing his propolis to elder customers from Europe, “No joke, they’ll cry,” says Sullivan. “That’s what makes it magic—when people who know the real thing recognize it.” 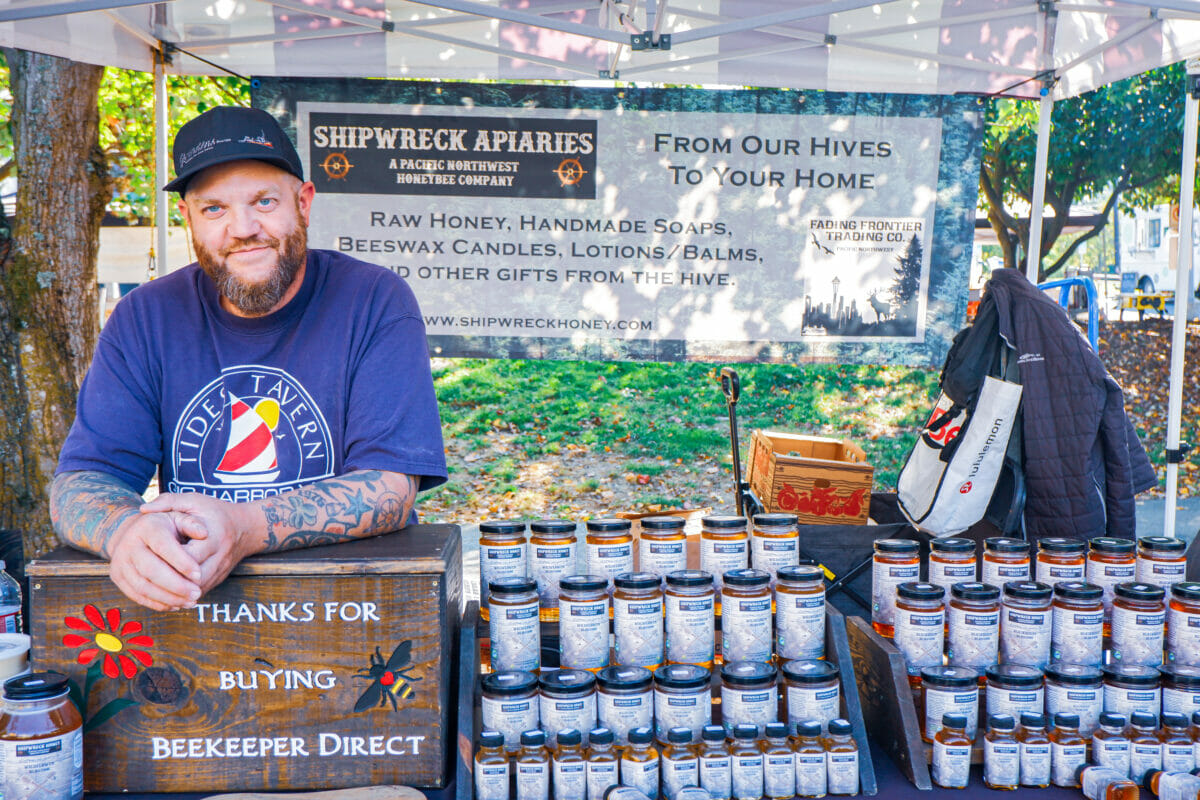 Legitimate propolis can be found on Etsy, but Sullivan says the best way to get it is to ask a beekeeper. Yet how are customers supposed to ask if they don’t know what it is? He sees a potential solution in forming collectives with other apiarists to produce, market and sell the product at scale. “The guy with two hives in his backyard belongs to a club that has 500 people who have two in their backyard,” says Sullivan. “Put them all together, and you’ve got an army.”

Collectives could tag-team farmers markets, with some members manning sales and others fielding propolis questions—empowering both beekeepers and buyers from the ground up. “There’s no reason this stuff can’t be flooded on the street,” says Sullivan, “where everyone understands what it is and it becomes a household conversation, if not item.”

Before the COVID-19 pandemic, events such as dinners and food pairings were an easy way to introduce whole groups of people to bee products. Such events, too, could be held collectively, driving income for even the smallest-scale producers.

Propolis is being made all over the forest, the city and in apiarists’ hives, whether or not they collect it. It’s there for the taking, the stuff of connection that constructs the web of life; it only requires reaching out, building networks of mutual support. No one ever asks about propolis, “but you did,” says Sullivan, earnestly now. “And it made my day.”