Watching the semi-truck driver skillfully wind through mature cottonwoods along the river bottom, there was an unmistakable focus. A corny person might say that the mood was abuzz with excitement. Some 1,800 honeybee packages awaited their summer home, ready to be tucked into the new hives before the spring weather changed for the worse.

For this hobbyist beekeeper of well over 20 years, helping a commercial operation such as Smoot Honey Co. in Power, Montana, was an eye-opening experience. Single hive bodies in groups of four sat ready at the first bee yard. As the stacks of 2-pound packages of honeybees lifted off the truck, the crew, most of us donned in white bee suits, divided into two groups.

The first group, which I chose, unstrapped the hives, removed the lids and put the packages out for each of the hives.

Even wearing the bee suit, grabbing a row of bees, particularly the “fuzzy” ones with escapes clinging to the outside of the wire, and holding them to my mid-section initially required a deep breath. But it didn’t take long to fall into the rhythm and not give it a second thought.

We placed a package on each hive, four per group, quickly unloading the entire pallet.

This installing group had its own rhythm, prying up the feeder can and removing the queen cage. When I install packages at home, I typically add a piece of marshmallow to replace the plug of the queen’s cage. But in this smoothly honed operation, they smeared a bit of honey and wax in its place.

Then they set the queen cage on the feeder can. They placed this in the corner of the hive.

They then dumped the bees in the hive, set the package inside and replaced the lid. Despite the added steps to their process, my group could not dawdle and stay ahead of them.

Read more: Ready to buy bees or expand your hive? Here’s how to make the purchase.

Smoot veterans, employees and friends who’ve been part of this spring dance for decades generously and kindly explained how and why they do things a certain way. There was a distinct sense of camaraderie, even for a newbie.

This is, of course, serious business. But there was still a fair amount of humor, particularly when someone was stung.

After installing roughly 1,800 hives in three bee yards over four hours—done before the predicted snowfall—my takeaway impression was that it’s like an Amish barn raising, but with more than a million lives at stake. At the end, enjoying the satisfaction of good work, we celebrated with a piece of date cake from their grandmother’s recipe.

Tradition in a Changing Industry

I also walked away with a greater appreciation for what they do and how they do it. Each year, Smoot Honey typically tends more than 4,500 hives spread over 5,000 square miles, producing close to 600,000 pounds of honey.

There are undoubtedly larger operations in Montana. But Smoot Honey is well-known throughout the region. They’re still closely tied to the national scene, however, when it comes to honey production and the health of the industry. 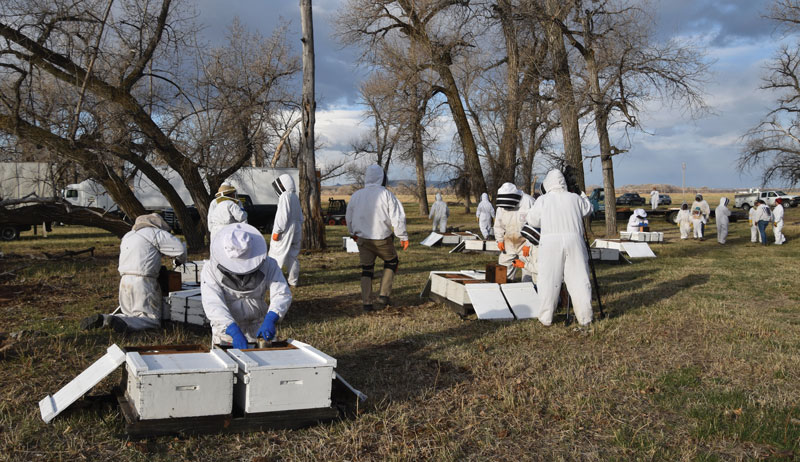 The economic and natural landscape looks differently than when Smoot Honey began in 1964 after Don Smoot and his father, Boyd Smoot, bought the business. In 1996, Don decided to retire so he asked his son, Dan; nephew, James Rehm; and son-in-law, Mark Jensen, to “try it for a year.”

To this day, Jensen and Rehm still helm the operation.

While they’ve modified their operation as needed, they follow how northern beekeepers used to manage apiaries. Instead of traveling to pollinate orchards in California and other regions, they start with new bees every spring. As long as it works, they’ll continue in this direction.

But outside forces do impact them.

“A lot of it is due to a shift in farming practices,” Jensen says. “When it’s all sunflowers, soybeans, canola or wheat as far as the eye can see, it doesn’t leave much for the bees.”

Mark says there has been more CRP land pulled out of production when grain prices were good. This, in turn, reduces format for the bees. But there are also some excellent incentives for producers to plant for pollinators through national farming policies.

Plus, organizations like Pheasants Forever work with farms to provide habitat for the birds. This ultimately helps bees.

The second piece that has changed significantly is the presence of the varroa mites beginning in the 1980s. Realistically, beekeepers—whether hobbyist or on a commercial scale—must deal with the mites or likely lose their hives.

This is where Smoot Honey was almost ahead of the game from the beginning. Because it is difficult to winter over hives in northern climates, it was standard practice to gas the bees in the fall and buy new packages in the spring.

As this practice shifted, Smoot Honey found a new market for the honeybees in the fall.

“Around 1990, we started to sell the shake hives in the fall,” Jensen says. “My father-in-law would buy packages for $12 and sell them for $4. The shakers (beekeepers buying the hives) would travel and do all the work.

The good news? The market for bulk bees has grown steadily since the early 2000s, particularly because many large commercial operations switched from primarily honey production to almond pollination. Smoot Honey is able to sell their hives in the fall to offset the cost of spring packages.

The Year in the Bee Yards

The market to buy bees in the spring is challenging some years, depending on how the bees overwintered.

“We have standing orders with different folks,” Jensen says. “Deals between beekeepers are generally done with a handshake, although it’s getting less and less that way.”

He explained that it’s a balancing act to source their bees. If a particular apiary is accidentally sprayed by agricultural chemicals or is wiped out because of an environmental situation, it’s extremely difficult to find thousands of packages of bees at the last minute.

Smoot Honey brings in many of their bees from California beekeepers they’ve worked with for years. Almond orchards and honeybees are mutually beneficial to each other.

Obviously, the honeybees enable almond pollination, but the bees also thrive on the nutritious almond pollen. This gives the colonies a boost, growing to a number that allows the beekeepers to split the hives and sell packages to hobbyists and professional beekeepers.

To further mitigate the risk posed by traveling from California to Montana in the early spring, Smoot Honey also purchases packages from a Montana apiary. “It’s gotten to where it’s not all the eggs in one basket,” Jensen says.

He notes they also lease semi loads of bees to increase their overall honey production. “Lots of guys don’t have honey territory like we do. And we need more production but don’t have to buy 400 hives. We put them in areas where it’ll produce early.”

Around Memorial Day, they’ll have a truck arrive with 480 hives, which is the average semi load, and put them on land they use near the Smith River. Because the leased bees are already established in hives, they produce honey right out of the gate. The Smith River tends to be an area with a single solid bloom period, which allows them to put up a lot of honey before preparing to go to California for the winter.

One advantage of starting with new packages every spring and selling them in the fall: They can leave their hives out longer to produce more honey. Many other commercial beekeepers wrap up their season early in order to prepare them for their journey to warmer climes. But Smoot continues production until late September or even mid-October, depending on the weather.

Even so, honey production has decreased over the years. “The average we produce is 105 pounds per hive,” he says, continuing that in the 1980s and ’90s, the honey harvest would range between 100 to 150 pounds per hive.

Now, many producers are happy with 55 pounds.

Smoot Honey typically harvests between 550,000 to 600,000 pounds of honey each season, which varies depending on the occurrence of late snowstorms, fires, drought, grasshopper invasions or any other matter of agricultural hurdles. “We’re farmers; that’s how we roll,” he says.

The Beauty of Buying Local

Smoot packages half of the honey for commitments to statewide businesses. These include Great Harvest Bread Co. in Great Falls, which regularly wins awards with their honey-based bread, as well as other local bakeries, brewing companies and Daily’s Premium Meats, which has partnered with Smoot Honey since the 1980s.

Beyond being a key ingredient in local products, central Montana residents find Smoot Honey in grocery stores or by visiting their storefront in Power. In typical Montana fashion, you write your own receipt and leave a check or cash.

The rest of the honey goes to commercial packers. But the prices add to the industry’s challenge. “Imports have been killing us for 20 years,” Mark says.

China is the world’s largest producer of honey, but they don’t always play fair.

Years ago, China and Argentina dumped honey, including rice syrup mixed into the product and labeled as honey, on the world market. And while duties and embargoes are in place to slow down the situation, the countries are known to ship the “honey” to India, or another country, where they label it from that particular country.

With a worldwide shortage, inferior “honey” enters the system. 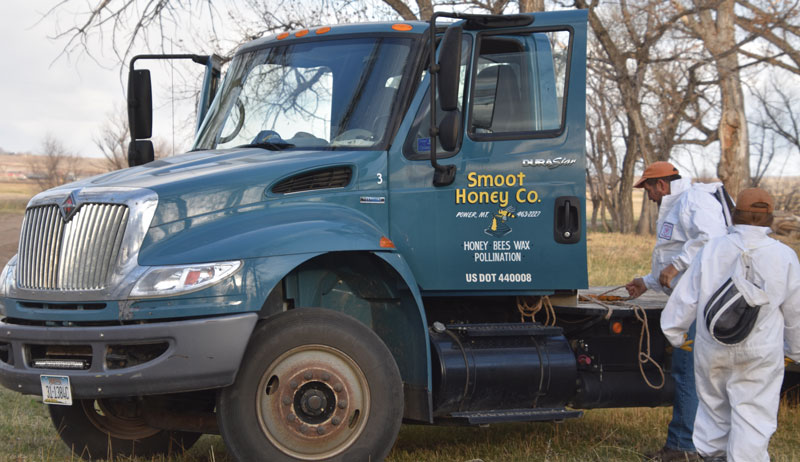 Even with some many challenges, Smoot Honey prepares for another season. “Beekeepers are very resilient,” he says. “As an industry we’ve been pretty good about adapting. You figure out how to keep going.”

Jensen was 25 when his father-in-law asked him to consider joining the family business. “Giving it a year” led to a lifelong career where family and friends work together. With his nephew working as the fourth generation in the business, there’s hope to continue the family business. But like everything in agriculture, nothing is a sure thing.

“It’s still a good way of life, but the cliff is closer than it used to be,” Jensen says.

In the meantime, Smoot Honey is gearing up for the upcoming season when everyone will be back in the bee yards, undoubtedly racing the snow, and hoping for a very good year.

To Bee of Service

You don’t have to keep bees to help bees. One way we can do our part to remedy the current situation is to buy local. If a regional honey isn’t available, at least read the label to make sure it’s from the United States.

Smoot Honey’s co-owner, Mark Jensen, also comments on how anyone can plant for pollinators. Last year at Smoot Honey headquarters, they planted a small plot of a pollination mix that blooms from spring to fall.

“It was cool,” Jensen says. “In July, we had I don’t know how many species of bumblebees. It was nuts. It was alive with flying creatures.”

Everyone can do this to benefit their local bees.

This article originally appeared in the March/April 2022 issue of Hobby Farms magazine.