I’ve been needing a Chipper/shredder for a while now. Nothing big, just enough for sticks and leaves to reduce to mulch and compost. I consider renting one all the time, but at 50 bucks a day it adds up quick. Not to mention, it’s a major “bag drive” with a rented one to get as much done as you can in as minimal amount of time as possible. I’m pretty busted up because of my occupation, so working like that is pretty painful for me. I’d prefer being able to do 20-30 mins at a time when my bod is up for it.

New prices are, well……new. Which is to say more than I want to spend. So I’ve been watching the used ads for a decent unit. But anything that pops up in decent shape seems to be near new prices or if it’s ….*ahem*…..”affordable”… it’s a beat up piece of crap near death.

So when a little 5HP MTD popped up the other day at $275, I was interested but skeptical. That it was close by was a bonus too. I email the guy and drop by to have a look.

He pulls it out of the barn. Yeah, it’s a typical piece of small yard equipment for the east coast. Translation: rusty buck-shee fixes, minimal to no maintenance and just generally neglected. IE: Buy it cheap as possible – use/abuse it – ignore it – when it dies, toss it out and get another. Repeat previous sequence.

But it’s all there and it’s a model with nearly no plastic on it, all steel. That’s a big plus for me because it means nearly anything is fixable on it.

He fires it up. It takes at least a dozen pulls and then it’s cranky as all ****. Not surprising as it’s -10c out that day and it’s been cold soaking in it for months. But no oil smoke once warmed, just black choke exhaust until it will run with the choke off. There’s also a second or two of metallic “clanking” as the flywheel spins up. Once warmed up, it runs decently and no strange noises.

He tries feeding a stick through the chipper chute. Yeah, it chips….sort of. He mostly has to force it down the chute and even then it does a P-poor job of it. Then he drops the back and starts feeding it in through the shredder section. Works better, but not stellar. Not surprising as it’s not meant for the size sticks he’s shoving through it while trying to prove to me it works.

He shuts it down and there’s a second of that metallic clank again as it stops. Well, it works at least.

A bit of talking and I discover he’s divorcing and selling everything off cheap (one of those divorces), $250 changes hands, he helps me load it in the back of my truck and it’s on the way home with me.

I get home and unload it in to the garage: 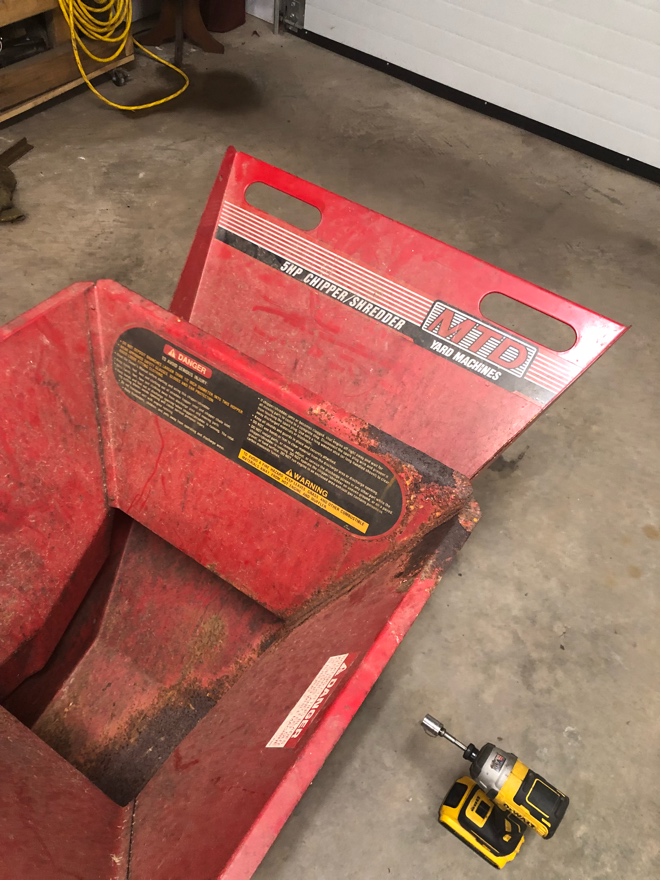 Yep, needs some attention for sure. Serial number pegs it at a 1991 model.

After letting it warm for a few hours, I drag it out behind the detached garage and fire it up. Sparks off on the first pull with minimal to no choke. That metallic clank is still there. Once it’s got a little heat in the block, I grab a stick that’s about 2-2.5″ in diameter and about 8′ long. Into the chipper chute it goes. Well, it chips it. Maybe “chips” is a bit too generous. of a term; it more tears it into strips/shreds, generally just beating it to death through sheer blunt force trauma. it performs. “Not well” would be the assessment.

I drag it back in to the heated garage and formulate a R&R plan. Sharpening the blades is a given, but I decide to just split the housing and pull the whole flywheel assembly off rather than messing with trying to reach inside and undo the bolts holding them on. It’s also worth it to split the housing to see if I can chase down that metallic clanking noise.

I split the housing, but the flywheel is frozen to the engine shaft. A puller won’t budge it and I don’t want to heat and beat on what is basically the engine crankshaft end. But with the housing split, I can get to everything I need to anyways.

The chipper blades are a total of 4 bolts to get both blades off and they come apart without trouble. Yep, they need serious sharpening. Calling them “blades are being generous, they’re more like pieces of bar stock with a bevel on one side than blades. Takes a while of grinding, filing and stoning, but I get them balanced, razor sharp, and nicely chisel shaped again .

The flils are arranged in groups of three and a total of four groups. Some are free to move, some are rust seized and some are in between free and seized. All of them are worn so badly the profile is nearly gone on the ends and the leading edges are all rounded. I could easily machine out new ones, they’re just 1/4″ thick bar stock machined to edges and a scalloped tip. But the trailing edge is (was?) a mirror image of the leading edges, obviously meant to be able to be flipped around for a fresh cutting edge. You can tell these have never been touched, so I just flip them around. The flail assembly gets cleaned up, lubricated and it all goes back together.

I fix up a few other small things like the torn and knotted pull cord and give it all a good de-greasing. Man, it’s got one thick coat of oil and fiber smutz mix all over it and it’s everywhere. It’s obviously never even seen a hose, let alone a proper cleaning. How it never overheated I’ll never know. Then it’s roll it back outside behind the garage and fire it up. Starts first pull and it’s obviously much happier than it was before. Sounds 100% better than it did, nearly no vibration (at least not like before) and the metallic “clank” sound is gone.

I grab the last 4′ of the stick I used to baseline the chipper, feed it into the chipper chute and;

Its….gone! Just gone! Like it was erased from existence!

It sucked it in so fast I almost couldn’t let go fast enough! I was so stunned by the speed and violence of what had just happened, all I could do was fling my arms out to the side and stare at that snarling pit of woody death! The output chute shows nearly no sign that anything had passed through it. The chips I can find are so small it’s almost like sawdust. There’s nothing that would indicate that 4′ of a 2.5-3″ stick had just been annihilated a split second earlier. Barely slowed the little 5HP Briggs at all. Sounded like a wood planer sucking through a plank!

So, 250 bucks and a little R&R and it seems I’ve got a decent little chipper shredder, at least for what I will use it for. Bought for the price of what it would cost me to rent one for 5 days. That’s a screaming deal in my books! If I get at least two seasons out of it, I’m money ahead. Not to mention, I can work at my own pace with it available whenever I need it.

Now to address a few more things like air filter, spark plug, oil change, install an hourmeter (all my small engines, used of not, get one to track oil change intervals), etc. Then fog the engine, drain the carb and put it to sleep for the rest of the winter. Springtime, I’ve got some work for this little bugger to do. Since it’s only going to be used a few times a year, post use maintenance will probably include blade sharpening to keep it operating “tip top” for next use. Hopefully it’s just a touch up on the blades (vice a full sharpening) if I give them some care after each use.

Next winter (when I don’t have a bunch of projects already on the go) I’ll strip it down, get rid of it’s “rusties”, and give it a nice new coat of “Rustoleum Red”. I’ll peel it’s stickers (with heat) so i can re-apply them after painting to keep that “factory look”.

Should do just fine for me for many more years to come.