Cream-colored squash and tepary beans ripen on vines and bushes whose roots grasp the heavy clay soil of Arizona’s Tohono O’odham reservation. Prickly pears, oregano and agave grow beneath a mesquite tree in the town of Patagonia, Arizona. And in a downtown Tucson garden, desert ironwood trees shade chuparosa shrubs and wolfberries.

These are just a few of the food plants native to various regions of the Sonoran Desert. It’s a notoriously hot (104°F in August) and dry (it gets three to 20 inches of rain annually) hook of land that juts up from Northwestern Mexico into Arizona, making a pitstop in California before shooting down the Baja peninsula. Indigenous farmers have been coaxing food from this arid turf for thousands of years, “working with the environment, not changing the environment,” says Sterling Johnson, farm manager and mentor at the Ajo Center for Sustainable Agriculture (CSA), where those squash and beans grow.

In 2020, the Sonoran Desert was clobbered by the effects of climate change. Temperatures hit 115°F a record 14 times and less than two inches of rain dropped during the normally more abundant monsoon. Saguaro cacti withered and fruit and vegetable crops filtered. On the Tohono O’odham reservation, the squash vines had a lower germination rate than usual, but they did still produce. Patagonia’s prickly pears and oregano fared just fine, according to University of Arizona ethnobotanist Gary Nabhan, who grew them in his garden. And according to Brad Lancaster, author of Rainwater Harvesting for Drylands and Beyondwho helped build the Tucson garden through a program called Neighborhood Forestersperennials showed drought stress and went dormant, but when rains returned in the summer of 2021, 98 percent of them rebounded.

Increasingly, the Sonoran and other dry places are showing us what a heat-and-drought-riddled future has in store for more of our food systems. These examples suggest that deep knowledge of dryland farming practices could blunt the impacts, giving some farmers a workable path forward. Whether conventional agriculture is willing to learn anything at all from these systems, however, is the question.

There are long traditions of farming in many dry places of the world. Humans have grown barley and millet in the Alpine desert of the Tibetan Plateau; yams, cowpeas and melons in the dry savannahs of West Africa; dates and chickpeas throughout Syria and Iraq; and wine grapes and tomatoes across the Mediterranean. As with Sonoran tepary beans and gourds and chiles, farmers—including, notably, the Hopi tribe of Northern Arizona—have grown these things without pumping groundwater with which to irrigate the crops. Instead, they’ve relied on rainfall, snowmelt and other harvested and diverted leftovers from precipitation events.

Depending on who you ask, “dryland farming” might produce a confusion of definitions. To some corn growers on Colorado’s high desert plateau, for example, it refers to any farming done in a dry place, even if it’s irrigated with groundwater. To Nabhan and Lancaster, it means relying on precipitation that falls on planting fields and in the watershed that sits immediately above them. Watershed water reaches crops through rainwater harvesting and/or ak-chin agriculture, an O’odham word that refers to “like what you do with stream flows in mountain areas, where you move it to ditches and let that flow onto fields,” says Nabhan. “Where I live, you could grow corn just on the soil moisture that was held from winter snow and early summer rains, and most Hopi continue to do that up on the Arizona-Utah-New Mexico border.” Maintaining as much precipitation as possible through these means, plus limiting evaporation and working with arid-adapted crops, are critical parts of the equation. 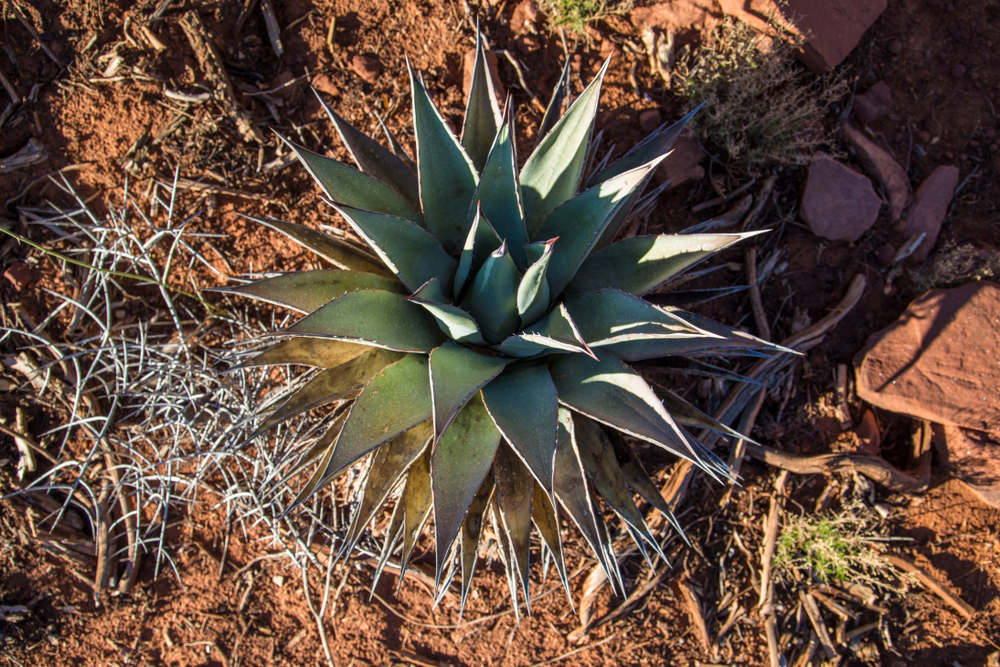 Selecting the right crops for dryland farming is crucial. Nabhan’s been experimenting with native Sonoran food crops for years, which have developed strategies to survive heat and drought. Indigenous farmers might plant annual seeds ahead of monsoon rains. As Johnson explains, the desert’s heavy clay soil becomes too sticky and thick to dig into once it’s wet. Short-cycle crops such as 60-day flower corn are harvested in about two months. “By that time, the summer rains have started to diminish and the soil moisture [on the surface of] these fields are depleted. But crops like watermelon root eight feet deep, so they can plumb deeper into water reserves below,” says Nabhan.

Perennials such as mesquite and cacti are plants that grow in “non-soon” years. In wet years, they provide overstory that shades annuals so they suffer less stress, cooling the ground around them by as much as 20 degrees. Nabhan says such perennial systems produce the same amount of food as an annual system over a 10-year period, using one-fifth of the water. That’s because the soil can hold more moisture thanks to nitrogen from the tepary beans and compost in the form of leaves and twigs that flow over fields from irrigation ditches.

Lancaster applies similar methodology in his projects, using what he calls “runoff farming” that’s informed by O’odham and Zimbabwean practices. “We first plant the rain, by creating water harvesting basins that are lower than the street elevation,” he says. “We then cut the street curb to direct gutter runoff into the basins, so the street becomes a free irrigation source.” In go trees native to the lower Sonoran that bear food and shade; Their deep roots also “bring deep moisture up to the top layers of the soil,” which buffers temperature extremes at the same time their shade minimizes evaporation. “Even in drought years, we still receive more water than the normal rainfall,” says Lancaster.

At Ajo CSA, Johnson passes on to farming apprentices some of the traditional O’odham knowledge he learned from his elders, which he calls sacred “remnants of our culture.” Although he otherwise keeps this knowledge close to the vest, he mentions that he doesn’t use overstory/understory systems on the reservation. His gourds, which can grow to 40 pounds on 20-foot vines, need space to sprawl so they can access scant water, and tepary beans “need to have access to sun all the time,” he says.

Johnson also teaches apprentices how to grow non-Indigenous crops such as broccoli. “With traditional farming, we know it works and it doesn’t require me to pump water from the ground,” he says. “But we don’t know yet how much of an impact it will have [outside the reservation], because it doesn’t work for everyone. And it seems like a win if more people can start having food sovereignty by knowing how to grow their own food.” He also points out that traditional dryland practices won’t work if there hasn’t been enough precipitation in a given year.

Lancaster thinks at least one of the tree-based practices he uses in Tucson is applicable beyond his gardens: water harvesting. “One of my main mentors started playing with how to build or retrofit a road so that it’s a benefit to the environment,” he says. “How can you drain a road at multiple points … so, in a [livestock ranch] area where you have waist-high native grasses, the runoff from the road freely irrigates that pasture?”

This relatively simple fix, says Lancaster, that’s used on a number of farms and ranches in Arizona, is nevertheless anathema in conventional agriculture, “which doesn’t look at any other water source; it only looks at the pipe.” But as the Colorado River hits crisis low levels and irrigated agriculture in California and elsewhere begins to run out of waterLancaster says it’s critical that growers re-evaluate their relationships with water. “All conventional farms should strive to keep every drop of rainfall on the farm, rather than draining it away,” he says.