Small dairy farms in Vermont teater chronically on the brink of insolvency. Nearly half of Vermont’s dairies have gone out of business in the past 10 years, primarily small farms. Things got even worse during the pandemic, with volatile prices and supply chain shifts. The pattern is similar among dairies throughout New England. Stabilizing revenues would go a long way to keeping these creameries in business and preserve a threatened way of life—the small family dairy farm.

Vermont’s farms, along with small dairies around the country, often change business strategies to survive. Some open farm stands. In the early 2000s, Vermont dairies surfed the organic milk wave, signing contracts with corporations such as Horizon Organic. Others turned to artisanal cheesemaking. Vermont’s family-owned dairies thrived for several years on the organic-artisanal model.

Last year, however, Horizon Organic, owned by the French company Danone, terminated 89 contracts in Maine, New York, Vermont and New Hampshire. Organic Valley, a farmer-owned consolidator, picked up many but not all of those contracts. And just in time for this year’s spring planting, nutrient costs rose about 80 percent because much of the nitrogen in commercial fertilizers is imported from Ukraine. These recent market disruptions emphasize the need for reliable dairy farm income.

RELATED: Farmers Struggle to Keep Up With the Rising Costs of Fertilizer

One way to build steady farm revenue is to sell electricity to the grid. A renewable energy generator called a biodigester turns a problem (cow manure) into a solution (energy and income). Biodigesters convert a slurry of cow manure into natural gas, which then runs a turbine to produce electricity. Dairy farmers sell manure-generated electricity back to the grid, often supported by a consumer-funded bonus for each kilowatt-hour. Could biodigesters become the new artisanal cheese?

There are a lot of reasons to love biodigesters. Dairy farmers can diversify their income while protecting the environment. Because they run on cow manure, that waste stays out of lakes. This reduces phosphorus pollution in local waterways, creating fewer algal blooms. Biodigesters also capture methane, a potent greenhouse gas that would otherwise escape into the atmosphere.

A tall biodigester at Jordan Dairy Farm in Spencer, Massachusetts.

Not only do biodigesters yield marketable energy, but their by-products save farm costs on supplies such as fertilizer, bedding and compost. Farmers using fertilizer produced by these systems report higher crop yields—and reduced odor compared with spreading manure on the fields. And given the skyrocketing cost of fertilizer, it’s an advantage to generate it on-site.

According to the EPA, in 2021, biodigesters nationwide avoided 5.95 million megatons of carbon dioxide equivalent. That’s like removing 1,282,042 gasoline-powered passenger cars from the roads for a year. Those biodigesters generated 1.73 million megawatt-hours, enough to power 86,500 houses.

The more cows that send manure into a biodigester, the more energy it produces. But cow manure is not an efficient fuel. Before the biodigester ekes out the remaining energy, manure has been digested—twice—by the cow. Less energy means less income. That means it takes about 5,000 cows feeding a manure-only biodigester to pay off the equipment quickly, says John Hanselman of Vanguard Renewables. That’s not a sustainable model for small farms.

RELATED: How These Farms Are Working to Fight Food Waste

Vanguard says it has a solution: Collect food waste, which would otherwise sit in landfills generating methane, and add it to manure biodigesters. Nearly a third of the world’s food is wasted, and it generates about six percent of global greenhouse gas emissions when it rots. But properly harnessed, food waste generates four to five times more energy than cow manure, giving biodigesters the punch they need to generate those kilowatt-hours.

“We’ve been able to crack the code on how to do digesters on small dairy farms,” says Hanselman.

Running a biodigester is not as easy as it sounds, especially when incorporating that all-important food waste. The logistics of collecting food waste, removing plastic packaging and transporting it to farms are complex and expensive—not a DIY moment. Fortunately, farmers can outsource these logistics.

Some companies, like Vanguard, offer turn-key biodigester management, from permitting through energy production. Vanguard foots the bill to maintain and operate the biodigester, collects the energy revenue and pays rent to the host farm. The farm keeps the fertilizer, bedding and other by-products of the biodigester. Similar turn-key companies operate in states including Washington, Wisconsin and Missouri. 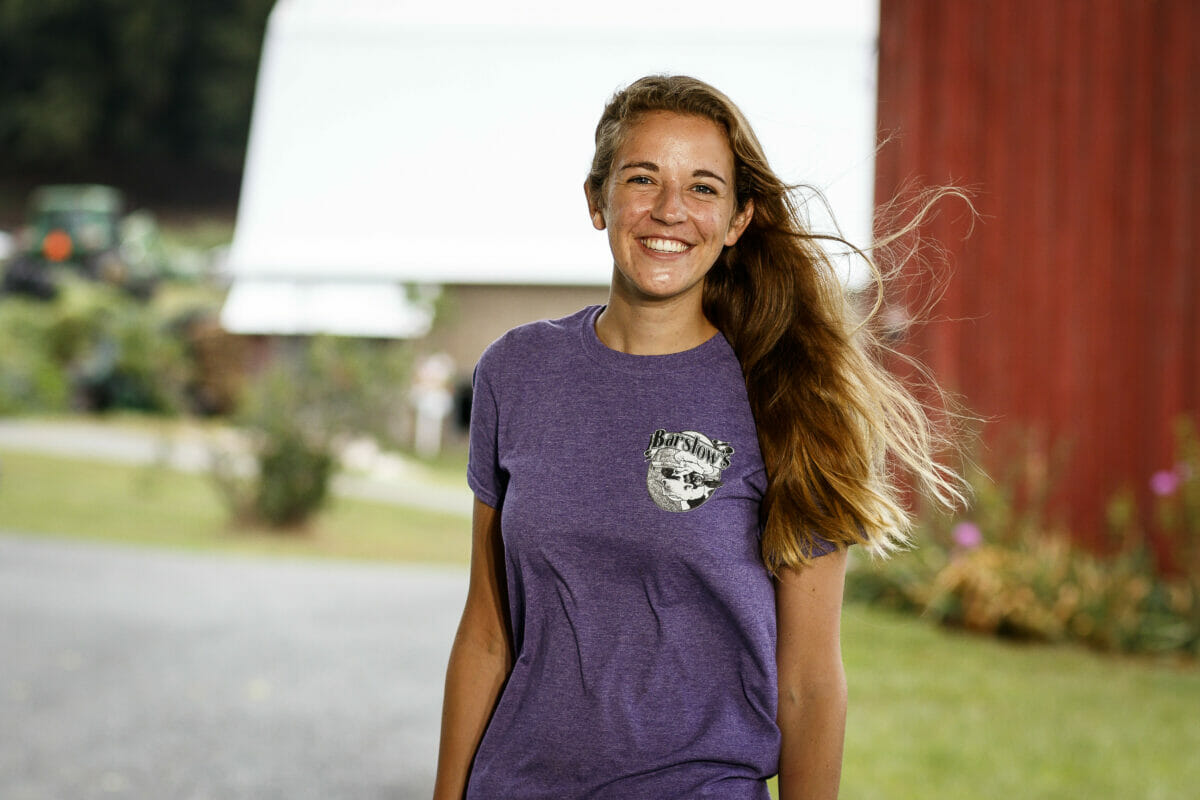 Denise Barstow Manz, of Barstow’s Longview Farm in Hadley, Massachusetts, is a seventh-generation farmer on the family’s 450 acres. The medium-sized dairy, milking more than 500 cows, generates about 85 percent of its revenue from conventional milk sales. Longview partners with Vanguard to manage its biodigester, and Manz says she’d do it again. “The beauty is that we can focus on farming and doing what we do well. And they can focus on running the digester from maintenance to chemistry to the waste contracts,” she says.

Manz knows colleagues running biodigesters solo. “There’s definitely farms out there doing their own operation. And I know sometimes if it’s corn harvest season or if they have something going on in the barn and the digester is down, it stays down longer,” she says. “That’s not ideal.”

The biodigester income stream is well established in Vermont. The Vermont Cow Power programme, launched in 2004, was among the first in the country. Cow Power now provides renewable electricity for more than 3,000 homes and businesses, including a ski resort and a brewery. And demand is growing. In 2021, the selectboard of Brattleboro, Vermont voted to purchase six percent of the town’s electricity through Cow Power. Most of the Cow Power farms in Vermont are running their own systems, with the notable exception of Goodrich Farm, a 900-cow dairy whose biodigester is powering Middlebury College.

Vermont has 16 active dairy biodigesters, more than 30 other states—impressive for its size. About half of Vermont’s digesters incorporate food waste to boost productivity. Notably, however, seven Vermont biodigesters ceased operation over the past 10 years. Most of these cited a faulty mixing design or problems obtaining food waste. But, for some, the issue was maintenance costs.

RELATED: Can the Northeast’s Organic Dairy Farms Be Saved?

“A lot of the early Cow Power systems are aging out now,” Hanselman explains. Around year 10, most biodigesters need a new transformer. “That’s a terrifying thing,” he says. “What farmer has $600,000 lying around for new electrical infrastructure?”

While other states have been slow to follow Vermont’s early start, California’s recent biodigester growth is like a new gold rush. California has 52 systems, leading the nation. The state passed a bill in 2018 requiring that 60 percent of its energy come from renewable sources by the year 2030—and it underwrote that mandated financial assistance. California’s renewable energy policy even provides a market for dairy biodigesters in other states, which sell their energy output to California.

Is the biodigester movement a cow-pie-in-the-sky dream? Even without counting installation, it’s clear that subsidies are needed to reap the benefits of biodigesters. This is not surprising; technologies that reduce the carbon footprint of any industry carry a price tag, as do farm subsides in general.

Like several other states, Vermont pays farmers a consumer-supported bonus above and beyond the market rate for electricity. Vermont’s utility customers opt into the Cow Power program by agreeing to pay an extra four cents per kilowatt-hour. Four cents seems to be the sweet spot. Much higher than that and consumers won’t pay. For example, Maine offers farmers 10 cents per kilowatt-hour; Maine has only one biodigester. Any lower than four cents and farmers can’t pay off their equipment costs in a reasonable time.

Longview Farm’s biodigester has connected the local community with the Barstow family’s values. “Climate change will impact every single one of us, and it’s certainly going to impact dairy farming. It already has; we’ve seen wetter seasons, we have hotter cows. If we can reduce our carbon footprint, it helps get us to carbon zero as a community and helps in some way to mitigate climate change. I think that’s really important. And I think we’re in a community that resonates with that,” says Manz. 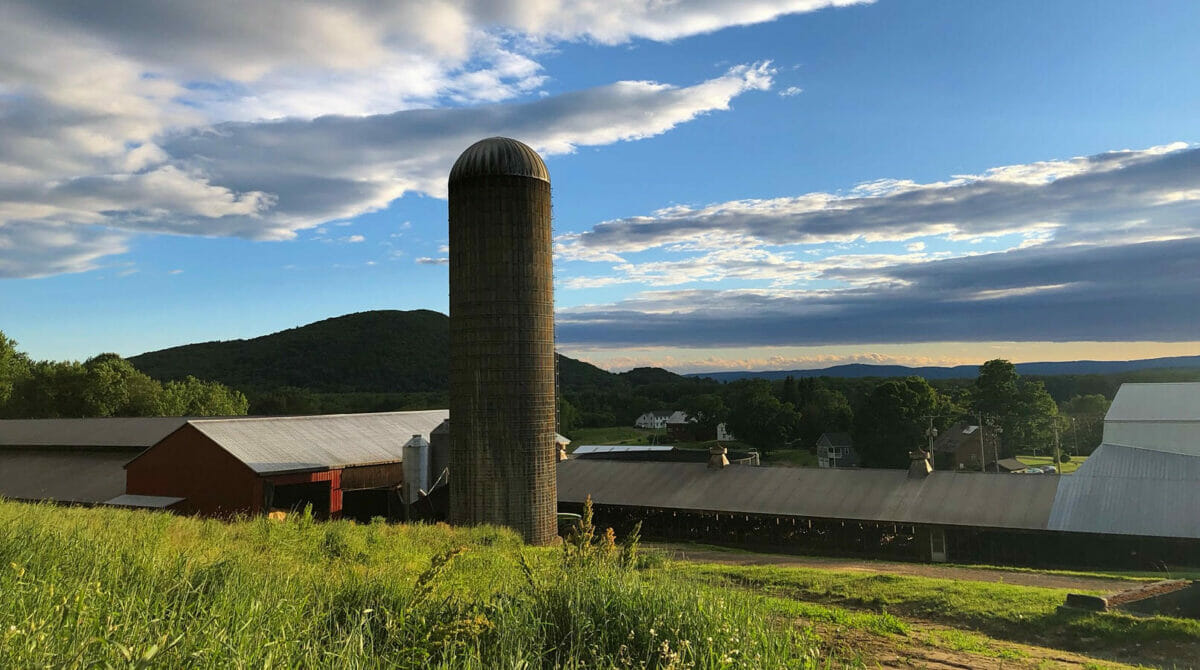 “The fact that we can take better care of our land with this digester is a win for us and the entire area.”

And there’s stewardship value in farm survival. “Keeping these 450 acres of open land is good for property values, but it’s also good for groundwater, habitat, food security and climate resilience. If we lose dairy farmers, we don’t only lose that farm and that part of the food system. So, the fact that we can take better care of our land with this digester is a win for us and the entire area,” says Manz.

The EPA most recently counted 265 dairies across 35 states operating biodigesters. Most of those farms are much larger than New England’s dairies, so, even with slow growth, there are more than 873,000 dairy cows nationwide producing renewable energy.

Generating energy is more complicated than making cheese. But for many small family dairy farms, it is a proven ingredient of their sustainability.

Those interested in applying for funding assistance to build a biodigester should contact their state’s USDA office or state rural development energy co-ordinator.