I was busy getting dinner ready when my son Jaeson came in through the kitchen sliding door. He gave me a look that I completely misread. I thought he’d seen all the vegetables I was dicing and was expressing his displeasure.

He stood there silently for a while, then finally asked how cold it would get overnight. I replied that we were dropping to the low 30s. He then asked if the ground would be more frozen with the snow we were expecting than it currently was.

An odd question. I paused in halving tomatoes and gave him a quizzical look.

“We knew it was bound to happen,” he responded. “Butters is dead.”

I abandoned dinner, quickly pulling on my muck boots, jacket and a pair of disposable gloves. Jaeson already had a shoe ready. We headed out to say farewell to our beloved Orpington hen.

When I contacted the vendor, they apologized for the error, refunded my money, and told me to keep the eggs. They didn’t have any more Chocolate Orpington eggs.

I set a total of 30 eggs to hatch, including the Mottled Orpington ones. Only three Mottled babies hatched (along with 20 Black, Blue and Lavender Orpingtons). Two seemed to wear little tuxedoes, while the third had a few black splotches on its creamy yellow fluff. My sons immediately named her Butters.

This buttery little pullet became a favorite with us and with her hatchmates. It seemed as though everybody wanted to be Butters’ friend, explore with her, snooze with her, even dustbathe with her. Butters quickly discovered how to hop up the steps to our deck and that, if she pecked at the sliding door, she’d be given a grape, a tomato or a piece of bread.

Of course she shared this knowledge with her best friends. Soon Butters and her buddies—Stormy, Selene, Claudine, Fitzgirl and Claude—came knocking on a daily basis.

Read more: You, too, can teach your chickens to do tricks for treats!

The Orpington breed is known for being docile and affectionate, and Butters definitely embodied those traits. On sunny days, when I chose to sit outside and read, Butters would announce herself with a soft cluck and either jump up onto my lap or settle down beside my chair.

She was trusting almost to a fault.

I almost had a heart attack when Jaeson called me out back to show me a new trick. He had trained Butters to perch on his bike’s handlebars while he rode around the yard. Butters also learned another trick: If we held up a piece of bread, she would jump for it.

It didn’t take long for her to share this new talent with her buddies.

Over the years, Butters chose to be a bachelorette. The roosters seemed to know there’d be trouble if they tried courting her, and she never showed any inclination towards broodiness. She became Auntie to younger girls, and the Orpington run remained peaceful and harmonious. 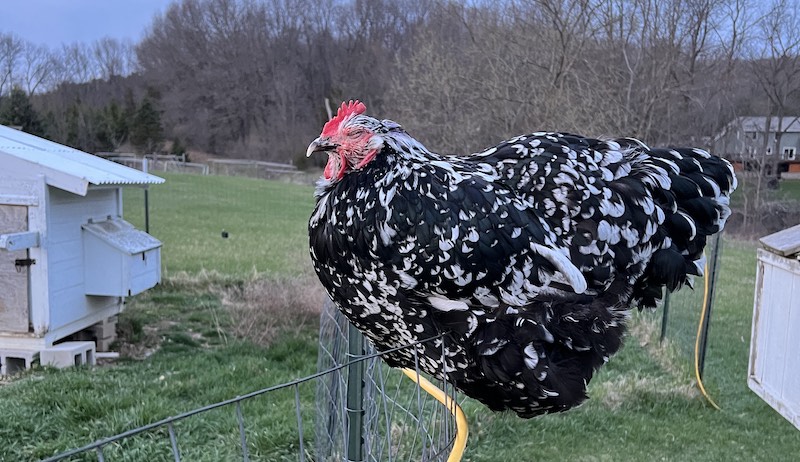 She—and we—suffered a true tragedy two years ago, when her besties all suddenly died over the course of two days. We soon learned that our neighbor to the east had used a powerful herbicide right at the property line, exactly where the Orpington gang loved to forage. For reasons I still don’t understand, Butters had not joined her crew in their forays to the border.

This saved her life but also changed it irrevocably.

With so few Orpingtons left and a growing number of Ameraucanas, I made the difficult decision of swapping coops. Butters would return to the small white coop of her youth, leaving behind the larger coop.

At least that was the plan. Butters wouldn’t have it. She’d lost her friends and wasn’t about to lose her home, too.

She and the remaining Orps refused to cooperate. They flapped their wings and shrieked and dashed around the run, eluding capture. After 30 minutes of non-stop, unsuccessful chase, we gave up.

Still, things were different for Butters. Lonely without her closest friends, she finally submitted to both Thomas Orpington and to Claude Orpington (who passed on soon after; his exposure to the herbicide had been to a lesser degree than that of the Orp girls).

Butters became broody for the first time in her life. But with no experience at setting, she was remarkably terrible at it. We finally rescued her clutch and put them under our Silkie, Natalya. Thus Natalia became surrogate mom to Margarine (what else would we name a child of Butters?), Claude Jr. and Thomas Jr.

Read more: Follow these 4 steps when burying a dead chicken.

Midlife for a Mottled Orpington

Oddly, Butters refused to have anything to do with her offspring, so Natalya happily them. At about 4 months of age, we moved Claude Jr. (CJ) in with the Ameraucana girls, as they had been roosterless for a year. He quickly showed them who rules the roost and continues to do so.

Margarine (called Margie for short) disappeared one afternoon and, despite hours of searching, was never seen again. Thomas Jr. (TJ, or Tiny because of his dwarfism) remained with Natalya until the fateful day I tried once again to do a coop swap. This time, Butters gave in and took up residence in her former coop, along with Tiny and Natalya.

The three formed an odd bond—mother, surrogate mother and son. Natalya somehow decided Butters was mom and would tuck herself beneath the larger hen to sleep.

As Butters’ eyesight slowly failed, she spent more and more time inside the coop, although I occasionally caught Tiny trying to cajole her into coming out. He did discontinue perching at night, choosing instead to stay beside the older Orpington hen on the coop floor. We covered the coop floor with extra shavings to provide comfort and warmth.

Every now and then, I’d find Butters outside, sitting contentedly under the wild daisies that grow in the run. She had always loved daisies. She gave my husband Jae the stink eye for weeks once after he weed-whacked the daisies down to clear the run for her. But even without her eyesight, she always managed to find the daisies.

And that’s where we found her, her head tucked forward as if she were asleep. We buried her out back in the chicken graveyard near where we’d laid her friends to rest. We covered her completely, putting a board, then multiple logs over the top of her grave. I added a sprig of her daisies on top.

Farewell, Butters. Thank you for the light and joy you brought to us.