Water scarcity is a growing concern. Lack of water from long, recurring droughts is increasingly dominating the food and agriculture. It’s driven up the cost of groceries and put a dent in farmers’ yields. According to NASA scientists, the past two decades have been some of the driest conditions on record. And recent data from the federal government shows that more than half of all states are suffering from moderate drought or worse.

For avid gardeners, especially in the West, the ongoing water crisis is a good time to reconsider which crops to put in the ground. There are some plants, such as rice, almonds and citrus, that require large amounts of water to thrive.

RELATED: California Wants to Pay Farmers to Not Farm This Year

Others, categorized as drought-tolerant crops, require very little. So, if you’re short on water, there’s no need to let it stop you from growing. There are a number of crops you can plant that require minimal water input. Dive into our guide that lays out a variety of planting options.

Figs on a branch. Photo by korkeng, Shutterstock.

Fig trees need to be planted in a spot that has seven to eight hours of full sun. This plant also needs well-draining soil, with a pH anywhere from 6.0 to 6.5. Sandy soil is preferred over loamy or clay solutions.

Plant your trees in late fall to early spring. In addition to full sunlight, fig trees appreciate a lot of room. If you’re planting more than one tree, make sure they have 15 to 20 feet between them. We suggest providing your figs with somewhere between 1 and 1½ inches of water per week—either from rainfall or irrigation. You will know if it needs to be watered if its foliage starts to turn yellow or its leaves drop off.

Improve a new tree’s chance of survival by planting it so that its roots are two to four inches deeper than they were in the tree’s nursery container. Fig trees planted in the ground may take eight to 10 years after planting before they begin fruit production. The common fig, Alma, Brown Turkey or Black Mission are all popular options. 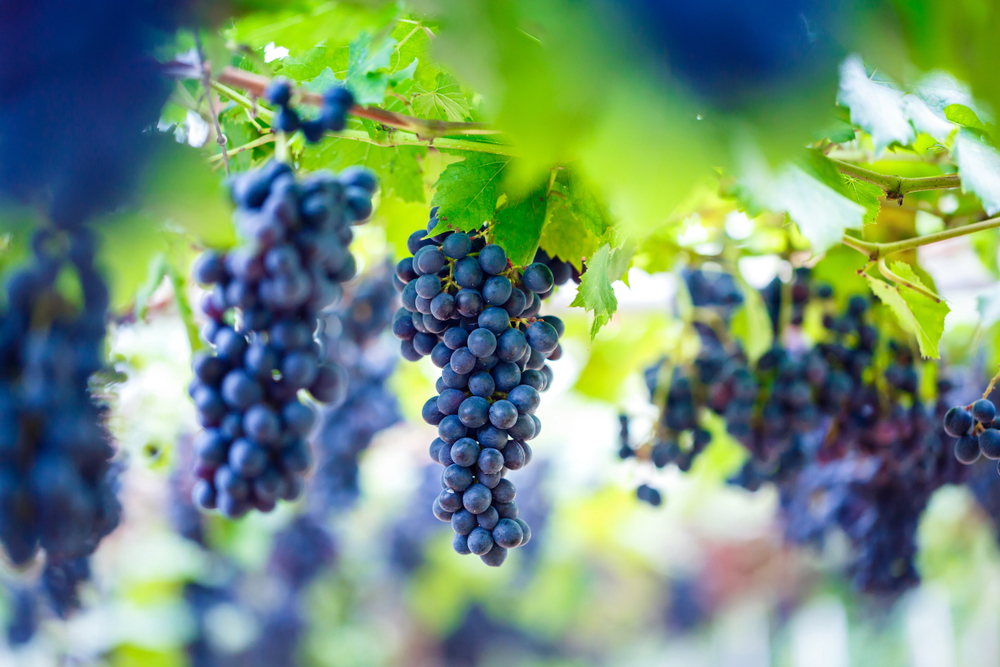 Once they have grown to establish long, deep root systems, grapevines can sustain prolonged periods of time without water. They should be planted in a spot that has six to eight hours of sun each day. Grapes prefer well-draining, sandy, loamy soil. Avoid planting anywhere near areas that collect water after it rains, as these plants don’t tolerate wet conditions very well.

If there’s no rainfall, saturate the soil at the base of each vine every seven to 10 days. If The leaves are wilting and the fruit is small, hard and dry, your vines need more water. If the leaves of your grapes are yellowing or if the tips of the leaves turn brown, this means you’ve watered it too much.

Read our guide to growing wine grapes for more information on planting and harvesting. On average, it can take two to three years for your crop to start bearing fruit. 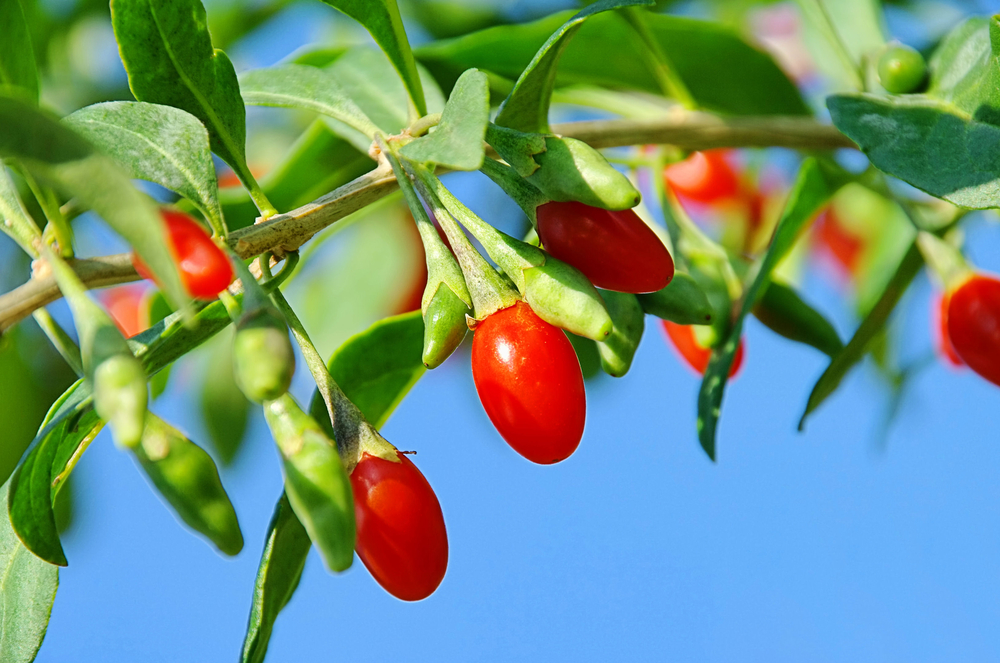 Good news: You can still plant a superfood with limited water needs. Pick a spot with full-day sun. Goji berries can tolerate many types of soil, but they prefer an environment that is well-draining with a pH ranging from 6.5 to 7.0.

If you have more than one plant, it should be spaced three to five feet apart within the row and at least six to eight feet apart between rows. This is to provide room for their root systems. It’s also important to note that the sandier your soil is, the more likely it will need to be watered. A good general rule, however, is to apply approximately one inch of water per week.

Because goji is a member of the nightshade family, it will also need to be pruned after the first year. If growing from seed, sow them indoors about six to eight weeks before the last frost. If opting for a tree or shrub, plant in the early spring.

Goji plants will begin producing fruit when plants are two years old. Maximum production will not be reached until three to five years after planting. You can harvest them 35 days after full bloom. The two most popular varieties available to all growers are Crimson Star and Phoenix Tears. 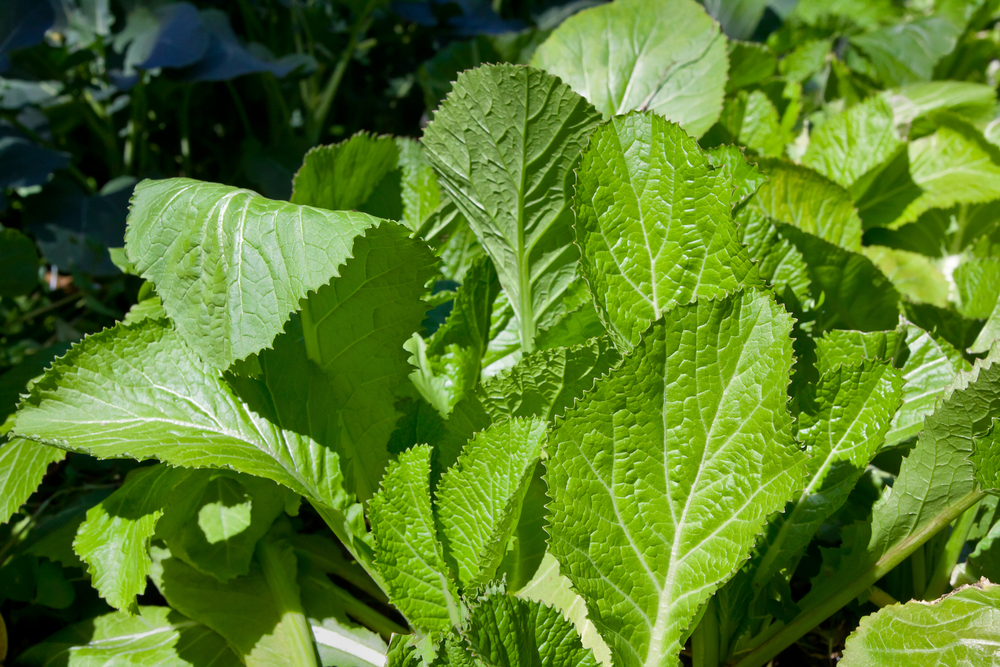 Also known as curly or curled mustard, mustard spinach, Indian mustard or leaf mustard, mustard greens are known for their peppery taste that bites like that of a radish. Plant your mustard greens in loamy, rich and well-draining soil with a pH of 6.5 to 6.8. They also fare best in a spot that has full sun or partial shade. Mustard greens will require one to two inches of water each week.

If you’re growing from seed, you can start them outdoors three weeks before your last frost date.

The Tendergreen or Southern Giant Curled are both varieties with low-maintenance water needs. On average, it takes anywhere from 35 to 70 days for mustard greens to be ready to harvest. You can cut the outer leaves, leaving the center in place to continue growing and produce more greens. Or you can treat the plant in a cut-and-come again fashion, cutting all the leaves to three to four inches from the ground and leaving the stub to re-grow. 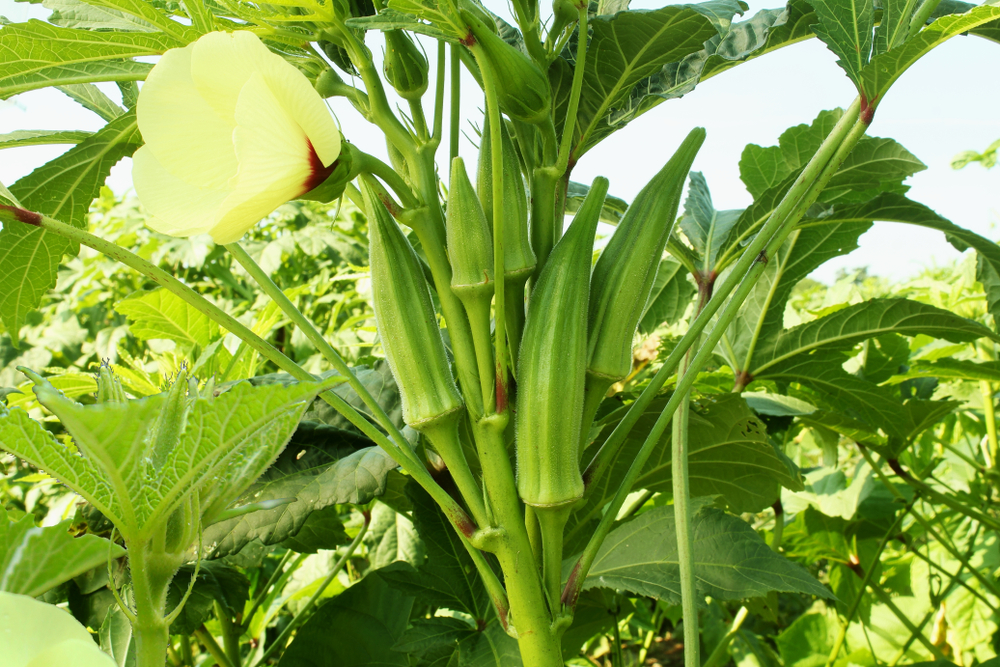 An okra plant. Photo by Shutterstock.

As a staple in many southern dishes, it may not come as a surprise that okra can withstand the heat and will fare without copious amounts of water. For varieties that are extra tolerant to dryness, we suggest Hill Country Heirloom Red, Gold Coast or Jing Orange.

Okra grows best when planted in a spot with full sun. Plant it in sandy, well-draining soil that’s high in organic matter. Provide one inch of water per square foot once a week. You can determine how to calculate that in gallons here. To improve the germination process, gently scratch the seeds with sandpaper and soak them in water for up to 24 hours before. You can plant your seeds with nine to 12 inches between them, so that seedling roots don’t get tangled. On average, this vegetable is harvestable within 60 days after planting.

For the best yields, plant okra in the spring two to three weeks after all danger of frost has passed. For a good fall crop, plant at least three months before the first fall frost. 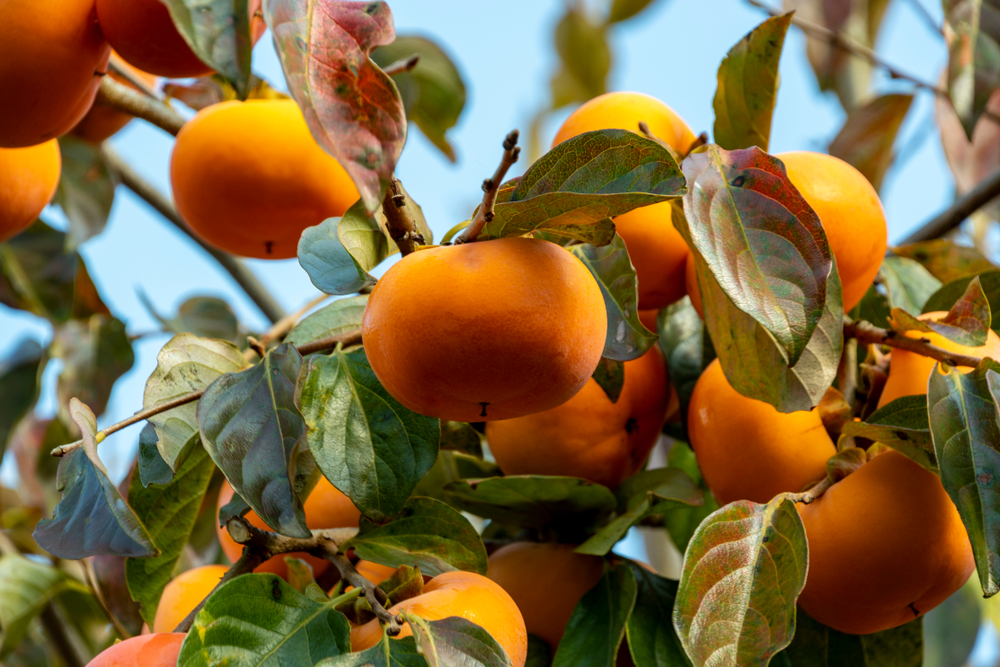 At first glance, one might mistake a persimmon for an orange tomato, but this fruit is prized for its silky texture and sweet, tangy flavor. Persimmons can tolerate a wide range of soil types, but well-draining loamy soil that is neutral or slightly acidic with a pH of 6.0 to 7.5 is best.

For best results and to minimize immediate water needs, we suggest planting a tree over seedlings or seeds. If you do plant a tree, Wait until the soil can be easily worked as you need to dig a hole as deep as the root ball and three times the width to accommodate its root system.

Choose a spot with full sun. If you leave a perimeter of mulch that stretches a few inches around the tree trunk, it will help avoid moisture accumulation. During the growing season, provide your tree with one inch of water each week. It can take trees anywhere from two to 10 years to bear fruit, depending on the variety. Eureka, Saijo or Texas persimmons are all good drought-tolerant choices. 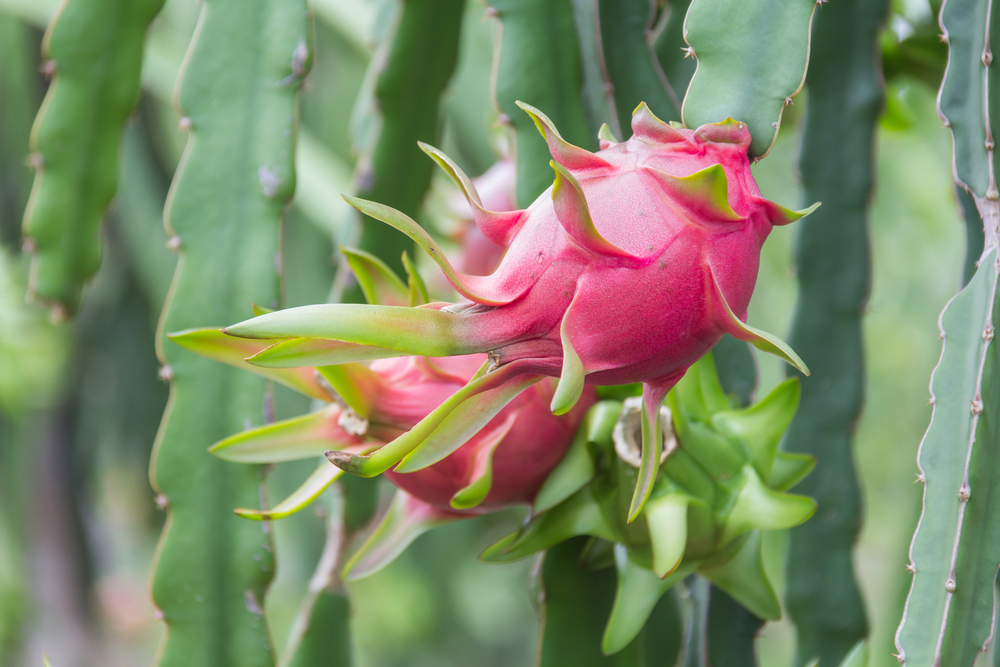 Pitaya, also known as dragon fruit, is the fruit of cactus species native to the Americas. That makes it an attractive—and tasty—option.

This tropical crop should be planted in a spot with well-draining soil and full sunlight. Ideal pH level for its soil is between 6.0 and 7.0. Provide about one inch of water per square foot—or the first six inches of soil. A good rule of thumb would be to do this once a week or when the first two inches of soil are completely dry. Mulching around the base of the plant can help the soil retain its moisture.

You can grow pitaya by seed, cuttings or by purchasing it as a plant. Pitaya will not grow in cold climates, so make sure that the temperature is above 40°F year-round. The optimal temperature is 65-80°F. If grown from a seed, it takes up to seven years to bear fruit. If planted as a young plant, it typically takes two years. You will know your fruit is ready when the flaps on the outer skin begin to wither. Twist off each fruit from the stem to harvest. 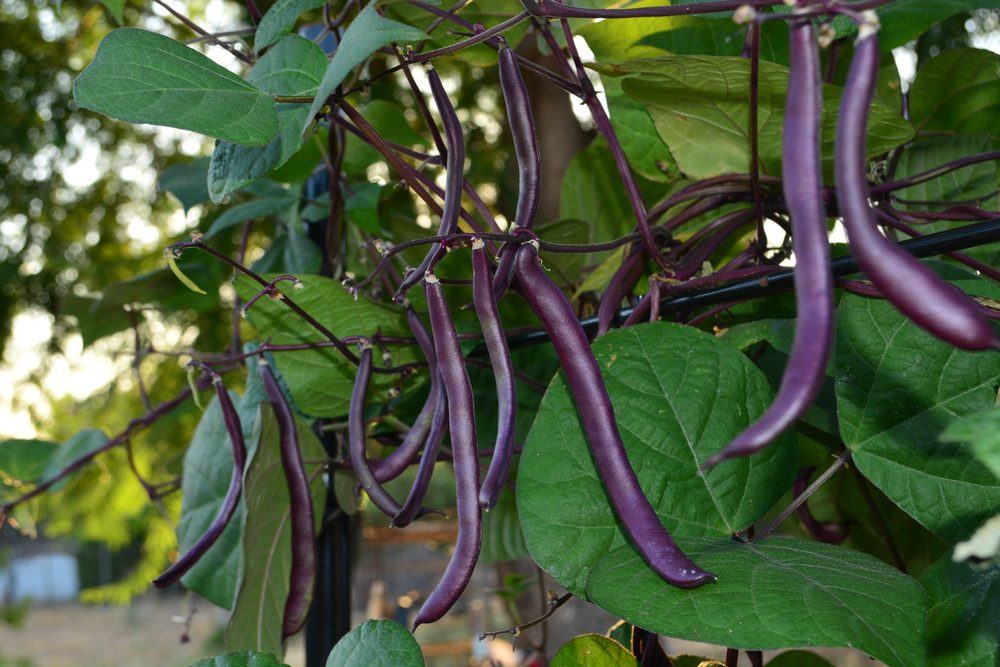 Did you know that pole beans produce two to three times as much crop as bush beans would in the same amount of space? They rely on residual water found in the soil. They also prefer a spot with full sun and well-draining soil that has a pH level of 6.0 to 6.5.

Upon planting, wait until the soil temperature is above 60°F. That could occur as early as April in southern climate zones and as late as June in cooler northern regions.

When it’s time to plant, ensure that there are three inches of space between each seed. This vegetable needs one inch of water for every square foot once a week. And it takes about 65 to 75 days for the plant to mature. 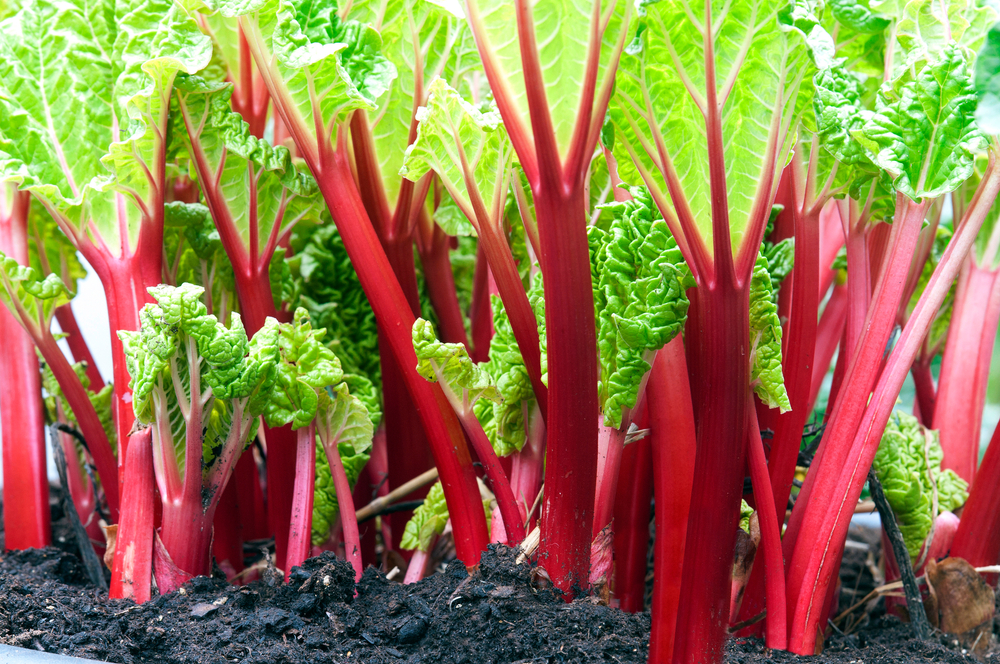 A bounty of rhubarb. Photo by HVPMdev, Shutterstock.

Rhubarb is drought-tolerant because of its fibrous root systems, but it’s also cold-hardy, too! It thrives in soil with a pH level ranging from 5.0 to 6.8. When planting, find an area that has full sun with good drainage. Many gardeners also plant them in raised beds.

Victoria, Macdonald or Valentine are popular variety choices. Rhubarb is typically grown from crowns, which look like root stubs. You can purchase these from your nursery or local seed company. Crowns can be planted in fall or spring. But if you want to start with seed, we suggest starting indoors eight to 10 weeks before the end of spring or the last frost.

When planting, place each crown upright in the planting hole with the buds one to two inches below the soil surface. Space the plants about three feet apart. After planting, water so that the top four inches of soil is soaked. It should be watered every seven to 10 days.

After planting, it’s best to wait two growing seasons before harvesting any stalks. The two-year establishment period allows the plants to become strong and productive. In its third year, rhubarb can be harvested over a four-week period. And in the following weeks, stalks can be harvested for eight to 10 weeks. 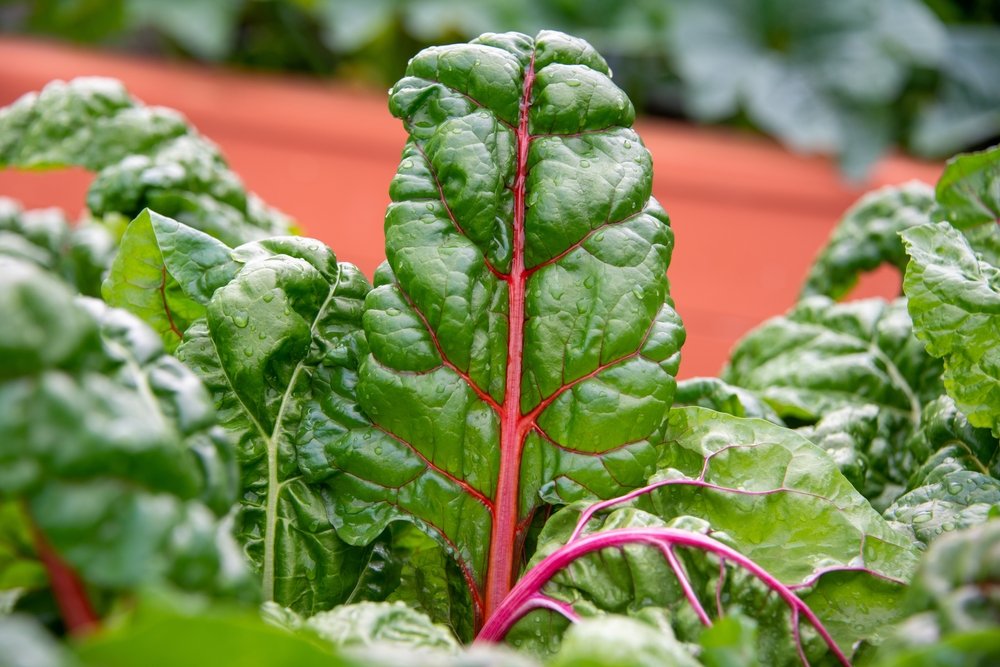 Swiss chard is a good leafy green option for those either looking to cut back on their water use or needing to do so. Not only is it drought-tolerant, it’s also cold-hardy. Your chard will prefer to be grown in a spot with full sun and rich, well-draining soil. Its pH level can be anywhere between 6.0 and 8.0.

When planting, ensure that seeds are two inches apart from each other. Its water needs are roughly one to 1½ inches of water each week. If hand watering, be sure not to get the plants wet. Wet foliage promotes disease or fungi, so apply water at the base of the plants, under the leaves instead.

On average, it takes about 50 to 70 days before harvest. The ideal time to plant is from early spring to mid-summer, and optimal soil temperature is 50-85°F. Bright Lights, Lucullus and Fordhook Giant are all great options, although most chard varieties are pretty drought-resistant.